Excellence
The IBEW stands for quality workmanship and dedication. We utilize our skills and training to achieve maximum productivity, follow al safety procedures and put in a full day’s work for a full day’s pay. We are committed to our Code of Excellence, which calls on our members and employers to work together to provide the highest quality of work possible, in every IBEW workplace throughout the United States and Canada.

Education
We are the largest private-sector trainer of electrical workers in North America, providing cutting-edge apprenticeships and ongoing education programs in the most advanced energy technologies, including renewables and energy efficiency. Ongoing training for members in utilities, telecommunications, manufacturing and other sectors puts the IBEW ahead of the competition when it’s time to get the job done right the first time.

Opportunity
We value our members’ differences as much as we value our shared vision. This commitment helps make the dream of fair play for quality work a reality. By securing good wages, solid benefits, and safer job sites, our union helps build a better road to the middle class for all working families.

Community
We are your neighbors. From wiring Habitat for Humanity homes to helping residents and businesses rebuild after natural disasters, IBEW members give back to their communities–and the world. Our electricians were on the ground to help the Northeast power up after Hurricane Sandy, and our members have traveled beyond borders–to Africa and the Caribbean–to volunteer their skills for community development projects. The IBEW takes leadership in our communities, working with elected officials, business leaders, and community leaders to build an economy that works for everyone. 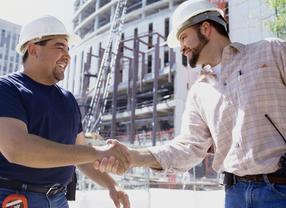 The nucleus of our Brotherhood formed in 1890 in St. Louis, Missouri. The group was chartered as the Electrical Wiremen and Linemen’s Union, No. 5221, of the American Federation of Labor (AFL). On November 21, the first convention was called in St. Louis with ten delegates representing 286 members. One of the outcomes of this first meeting was the creation of the Preamble, and the name of the organization – National Brotherhood of Electrical Workers – was chosen. Even our emblem, the hand grasping the bolt, was established at this first convention.1899 – At the Sixth Convention, the name of the union was changed to what it is today: International            Brotherhood of Electrical Workers.1916- Local 426 received IBEW charter representing 22 members in local jurisdiction.1919 – Council on Industrial Relations (CIR) is established.1920 – After several  the IBEW headquarters is relocated permanently to Washington, D.C.1927 – At the 19th National Convention, the IBEW Pension Plan was established.1929 – Last convention held for 12 years due to the Great Depression.1941 – The Golden Jubilee year of the founding of our Brotherhood and the 21st National Convention held in St. Louis, where it all began. 869 local                       unions and nearly 200,000 members were represented.1941 – The National Apprenticeship Standards for the Electrical Construction Industry were established.1947 – The National Joint Apprenticeship and Training Committee was established.1954 – The National Convention in Chicago boasts 3,138 delegates representing a membership of 625,000.1974 – Membership reaches more than one million members.1991 – 34th National Convention celebrates the 100-year milestone of our Brotherhood2001 – 36th National Convention held in San Francisco, CA2006 – Local 426 celebrates the 90th year milestone with Recognition Banquet2008 – Local 426 represents over 620 members in the local jurisdiction2011 – Local 426 celebrates the 95th year with Recognition Banquet and starts planning 100th

The International Brotherhood of Electrical Workers (IBEW) is a union of 725,000 members, making us the largest organization of electrical workers in North America. Our members work in nearly every part of the economy: construction, utilities, telecommunications, broadcasting, manufacturing, railroad and government. IBEW members can be found on the job at construction sites, power plants, factories, offices, shipyards, TV studios and rail yards.

Formed in 1891, we have earned our reputation as the oldest, largest and most professional Electrical union in the world.